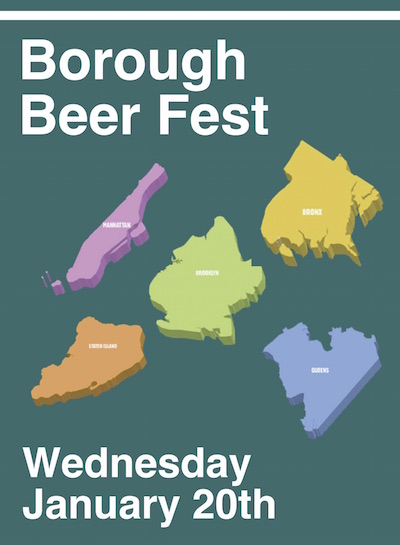 We probably don’t need to tell you that the New York City craft beer scene has exploded. Three years ago when we held the 1st Annual Borough Beer Fest each participating brewery was able to pour two beers (with lines to spare). This year, we have a full lineup with one beer each from the twenty-four local breweries that call NYC home. From Brooklyn’s OG, Brooklyn Brewery, to Brooklyn newest-G, Strong Rope, this year’s Borough Beer Fest is as diverse and exciting as the city itself.

This year we’re also pairing local beer with local BBQ (or rather, Bagocue) from our friend Bago at BAGOCUE Original Barbecue. Bagocue captures the bold character of Brooklyn in every bite of their handcrafted goodness – a perfect compliment to beer from any of NYC’s boroughs. We’ll be providing BBQ from 5:30pm – until it runs out, so plan on getting here early if you want a meat treat.

The Borough Beer Fest has quickly become one of our favorite events of the year because we get to celebrate the vibrant NYC craft beer scene with the people we love who make up this amazing community — and also because, well, we get to drink some of the best beer being made anywhere. So, come out this Wednesday beginning at 3:00pm and raise a glass of and with NYC’s finest.