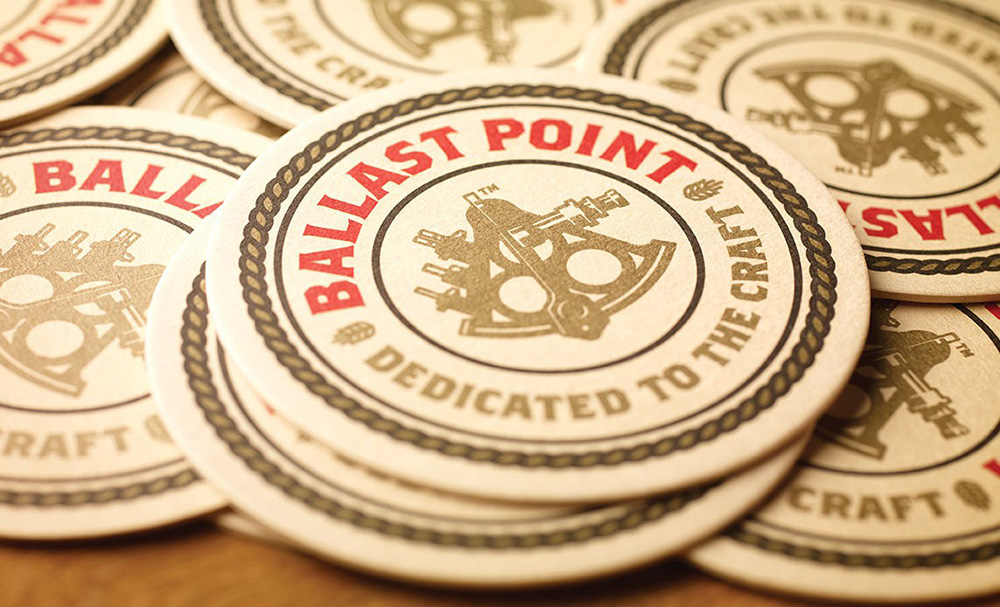 Join us as we welcome San Diego’s Ballast Point Brewing. The west coast brewer brings us cool variants on some of their classics as well as the beers that made them famous.

Our Wahoo Wheat is brewed with unfiltered, un-malted wheat and oats that give it a distinctive cloudy complexity.True to the Belgian tradition, this Witbier boasts a refreshing, citrusy flavor thanks to the orange peel and coriander we add to the boil. This makes Wahoo an ideal beer for year-round beach weather.

We take our year-round production Big Eye IPA and infuse fresh skinned, sliced ginger root into the beer post fermentation. The spicy Centennial hops used in Big Eye go very well with the spicy taste and aromatics from the fresh ginger root. The solid malt backbone of Big Eye also lends itself well to ginger, almost adding a candied component as it blends across your palate.

Some might think we’re out of our gourd for making a pumpkin ale, but our Pumpkin Down is not like the others. The caramel and toffee maltiness of our Piper Down Scottish ale is the perfect backdrop for a boatload of roasted pumpkin. Just before bottling, we add a subtle amount of spice to complement, but not overwhelm, the earthy flavor. It was a smash at the brewery, and we think you’ll agree.

Our Sculpin IPA is a great example of what got us into brewing in the first place. After years of experimenting, we knew hopping an ale at five separate stages would produce something special. The result ended up being this gold-medal winning IPA, whose inspired use of hops creates hints of apricot, peach, mango and lemon flavors, but still packs a bit of a sting, just like a Sculpin fish.

Our Grapefruit Sculpin is the latest take on our signature IPA. Some may say there are few ways to improve Sculpin’s unique flavor, but the tart freshness of grapefruit perfectly complements our IPA’s citrusy hop character. Grapefruit’s a winter fruit, but this easy-drinking ale tastes like summer.

Calm Before the Storm

Calm Before the Storm came from a quest for a warm weather alternative to our Victory at Sea Imperial Porter. Like its more robust cousin, we infuse a punch of flavor using cold brewed Caffé Calabria coffee and a hint of vanilla. But this time, we added it to a lighter-bodied golden cream ale. The end result is a surprisingly bright, coffee-forward beer that’s perfectly refreshing.

Our Grunion Pale Ale wasn’t born on a beach, but in a backyard. Originating from an employee-only home brew contest, this award-winning hoppy pale ale is named after the tiny local fish known for late night frolics on shore. A pair of new hop varieties lend strong yet balanced summer melon aromas and herbal flavors, while a soft caramel malt sweetness holds it all together.

Our Fathom India Pale Lager combines time-honored lagering techniques with the hop profiles of a West Coast IPA recipe. The cold-fermenting lager yeast provides a clean base that allows the citrus and pine aromas from the hops to really shine. The result is a gold medal beer with a refreshing, easy drinking character and just the right amount of depth.